It's Just One Of Those Kinda Days....Too Hot To Do Much But Sleep 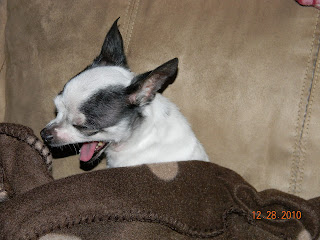 Chihuahuas are small, but very sturdy little dogs. I found out something about my dogs today. Now, most chihuahuas are known for burrowing under the covers, and as usual, my two didn't think twice about getting under the blankets when I decided to lay down and try to take a short nap. I had on some very old pants, but they were knit.....oops !  that was the wrong thing for me to wear. Little did I know, that there was a small, and very tiny hole in the back of them. My Bella somehow put her paws up against me and her nail got caught in them. I tried to get her released, but couldn't so I had to hollar out for my daughter to come help me. She ended up cutting a much larger hole out of my britches to release my poor dog's nail. Bella was distraught over it and would not allow her to clip her nails.  She stayed still long enough for me to cut most of the material off the nail, but later I am going to have to get the clippers out, when she's calmed down a bit more. I am a couple weeks behind on her nail clipping and this just showed me that I need to keep up on things. After my daughter graduating and all the company coming in and out, I got pretty caught up in all the goings on. Next time I will not let the nail clipping go longer than it should.
2 comments:

Email ThisBlogThis!Share to TwitterShare to FacebookShare to Pinterest
Labels: chihuahaus

The Nosey-ness Of My Bella Dog 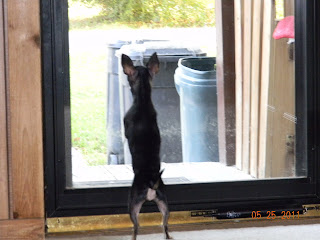 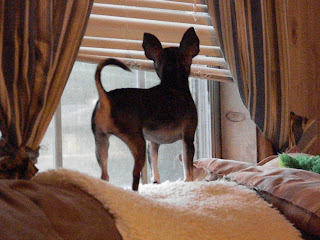 This past week, I had a really hard time with my chis.  They proved just exactly what everyone says about them being true to their owner and protective. My youngest daughter was graduating and two of her older sisters and families came in the celebrate the event. One daughter has a 5 yr old, and neither one of my chihuahuas liked her. She, of course, wanted to pick them up and neither Bella or Shorty wasn't having any part of that. They were scared at first, like most chis....After they found out that our guests were staying for awhile, they warmed up, and at times, even allowed them to pet them or pick them up...even a time or two with my 5 yr. old granddaughter, but not much. She wanted to handle them WAY more than they wanted her to. I had to explain to her that they didn't always want to be picked up, and for them, there were times that I put them into their kennel so they could have a break from all the action.  I have had people ask my opinion about getting chihuahuas for their children. There are some that will do very well, but alot of them just would rather be around the adults...I think this is pretty much characteristic for the majority. Although, I will say, mine were fairly good about it, most of the time.
1 comment: 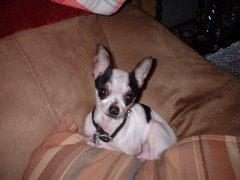